There were concerns raised before and during the Public Inquiry that there was insufficient promotion of the Inquiry. We know the Council may come back and say that they fulfilled their legal obligation of a notice in a local newspaper and the posting of a notice at the Council offices the day before. However, we believe this equates to the bare minimum. Which for a gateway site to Margate seafront, is in stark contrast to the resources allocated to the Dreamland CPO Inquiry in the summer.

We contacted Councillor Clive Hart, Leader of Thanet District Council on Sunday November 4th with a plea asking why there were no details of the Inquiry on the TDC website.

We didn’t receive a reply.

On Monday morning on November 5th, we contacted the Planning Department with urgency. It was confirmed to us the Inquiry wasn’t on the Council website and it was sufficient it had been placed in the paper.

The Inquiry started on Tuesday November 6th and 10am. At 9.23am a tweet from the Council’s Twitter feed was published announcing that the Inquiry would start on November 6th. 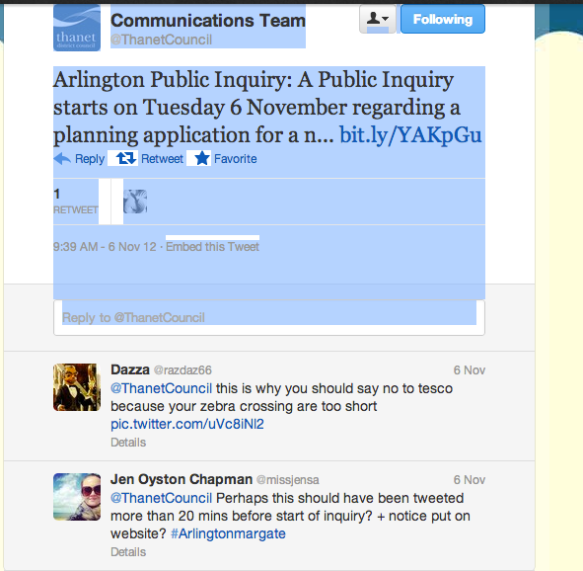 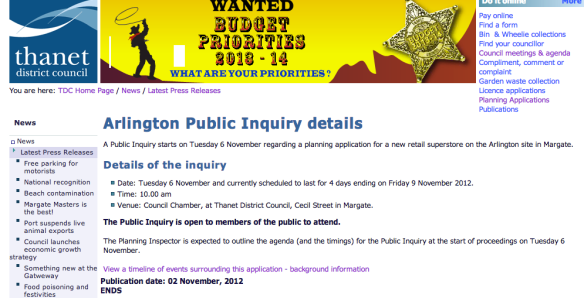 Creating a press release for the Inquiry due to start on Tuesday November 6th on Friday November 2nd is bad enough. The Thanet Gazette deadline for news is on Wednesdays for the next Friday. But not publishing it or issuing it until 37 minutes before the start of the Inquiry is shameful. And further, not explaining fully how the public could participate in the Inquiry. None of us knew that those who registered to speak on the morning of the 6th were then given the right to ask questions of the witnesses.

Why does this matter?

Well, clearly it did. Because throughout the Inquiry proceedings many residents spoke up and complained they did not know the Inquiry was being held or have sufficient details.

Contrary to the Dreamland CPO there was also no daily reporting from the TDC communications department and the one page, one paragraph statement is all there is to date.